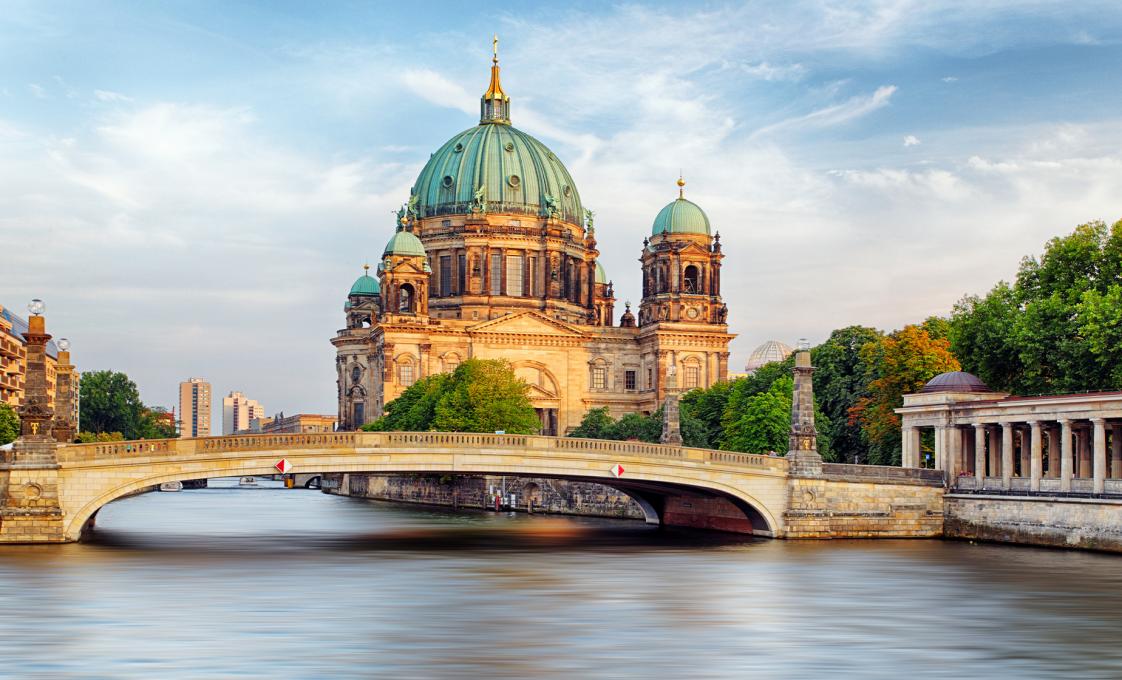 This full day program, lead by trained, experienced, English-speaking guides, is tailored for cruise ship guests who want to see the most of the Berlin sites during their limited time. Groups are never more than 30 guests.

This full-day tour, in groups of no more than 30 guests, is a "must" for first time visitors to Berlin as it gives you the opportunity to see Berlin's Top 20 Sites during your visit. Enjoy photo stops at many of the sites plus free time (strictly time permitting) to pick up some souvenirs.

Your first stop in Berlin will be at the Charlottenburg Palace, where you will have a few moments for a photo stop at the oldest surviving Prussian palace that reflects the former splendor and grandeur of the Hohenzollern dynasty.

After this visit, your tour continues past the famous Humboldt University, which was founded in 1810 and is one of Berlin's oldest universities with 185 courses and more than 33.500 students.

Pass by Berlin's most prominent Jewish landmark the "Neue Synagogue", which was rebuilt as a facade as the site of the original synagogue is wasteland, deliberately left as a memorial to what was damaged by Nazi flames and finished off by war time bombs.

From here you will continue your journey past Museum Island. The Museum Island is located in the central district of Berlin and houses five internationally significant museums, including the Pergamon Museum. As being a magnificent work of art itself, the Museum Island is the only architectural and cultural ensemble that is considered to be part of the UNESCO World Heritage Site.

Just right next to Museum Island, at the river Spree, you will view the Berlin Cathedral, which is the largest church in Berlin. During World War II the cathedral was heavily damaged and the restoration took almost 50 years - with its magnificent dome and beautiful interior, every year the Berlin Cathedral attracts thousands of visitors from all over the world.

Your next top sight will be the Bebel Platz. It was here, in 1933 that the Nazis ordered the book burning by National Socialist students who burned the works of hundreds of free authors, publishers, philosophers and scientists. At the Bebel Platz, a symbolic underground library is left empty with the space for 20,000 books that were estimated to have gone up in flames. Time permitting you will have the opportunity to step out of the van for a short photo stop.

On the way to Gendarmenmarkt Square, which separates the Theatre, the German Cathedral and the French Cathedral, you will pass by the famous boulevard "Unter den Linden." From there, you will continue to the famous former border crossing Checkpoint Charlie and a remnant of the Berlin Wall for a photo stop. Checkpoint Charlie was the best-known Berlin Wall crossing point between East Berlin and West Berlin during the Cold War. The name was given to it by the Western Allies.

Continue your journey passing by Potsdamer Platz, formerly a no man's land between East and West where the first gap in the Berlin Wall was made in 1989. Today a pristine block of futuristic glass-and-steel skyscrapers includes the headquarters of Sony Europe and Europe's first traffic light built in 1924.

A few blocks from here a somber memorial commemorates the Jews who perished in Europe during the Second World War; the Holocaust Memorial, which was officially opened only in 2005 and designed by the New Yorker, Peter Eisenman. A stop will be made here for a photo before making your way to the next photo stop, the famous landmark, Brandenburg Gate. This monument, more than any other site symbolizes Berlin's history.

Close by you also pass by the Reichstag building, which is Germany's seat of Parliament. Today it is well-known for having the world's largest glass dome, designed by the famous architect Sir Norman Foster.

On the way to Bellevue Palace you will have a chance to catch a glimpse of the Victory Column, a major tourist attraction and monument in the city of Berlin which was built to celebrate Germany's victory over France in the Franco-Prussian War. Continue to the Bellevue Palace which is situated in the Tiergarten and has officially served as the residence of the President of Germany since 1994.

A drive into the former western part of Berlin, will take you along the Kurfurstendamm (Ku-Damm), which is West Berlin's most popular shopping street and also referred to as Berlin's Champs Elysee. Here you will pass by the Kaiser Wilhelm Gedächtniskirche (also known as the hollow-tooth) which since World War II has served as a reminder of the damage done by the war. Close by, you will pass by the largest department store on the continent of Europe, KaDeWe. This shopping paradise is a legend and had its 100th birthday in 2007.

Depending on the order of the tour, traffic conditions and group's promptness, you may enjoy some free time for shopping or an afternoon snack at KaDeWe, Unter den Linden Boulevard or Berlin's main train station (depending on the day of the week).

A traditional German pub-style lunch is included at a local restaurant.

After this memorable day taking in the Berlin sites, you will return back to Rostock / Warnemunde.

PLEASE NOTE: Groups of 7 or less will have a driver / guide who will meet them at the pier and guide them in Berlin. Groups of 8 or more will be met at the pier by an escort for the drive to Berlin and will meet their guide in Berlin. Tour duration is approximate and may vary based on traffic to/from Berlin as well as in the city.

We are experts in providing exceptional shore excursions. We understand that in today's fast paced world, vacations have become an increasingly important way to relax, reconnect with family and friends, and experience new and interesting places. With this in mind, we provide the highest quality tours by performing extensive research, and detailed reviews. While other companies also offer excursions, we strongly believe our expertise and approach set us apart. The large cruise lines sell shore excursions - typically in very large groups visiting high traffic sites. We focus on smaller groups visiting more interesting and authentic locations using more personalized local operators. While the cruise lines are experts in delivering cruises, we are experts in delivering shore excursions.

Our Approach
We believe quality service is not only highly valued by customers, but ultimately leads to better experiences and higher satisfaction. Unlike the cruise lines and other tour companies that rely almost entirely on websites, we encourage customers to call us. We want to invest our time answering your questions, providing input, and selecting the excursions that best meet your needs.

Our Tours
Our goal is to provide customers a wide array of exciting, appealing, and enriching tours. For those customers who prefer to travel in smaller groups with more personalized service, we offer a wide variety of small group tours around the world. These tours generally range in size from 2-12 people compared to larger tours which can number up to 50 people. While exploring the destinations and ports on this website, feel free to search for these "Small Group Tours". For those customers interested in private tours, we offer many outstanding excursions that allow you to travel with your party alone and, in many cases, to fully customize your tour. Search for "Private Tours" if you are interested in this experience. Our "Scenic" tours provide up close and personal access to some of the most spectacular natural environments on Earth from majestic glaciers in Alaska to spectacular reefs in the Caribbean. Our "Cultural" tours allow customers to experience local customs, entertainment and culinary delights ranging from tribal dances in Alaska to an outstanding local meal in Santorini, Greece. Our "Active" tours offer a multitude of exciting and adventurous ways to experience our destinations. Our customers can kayak the turquoise waters of the Caribbean, hike to a spectacular waterfall in Hawaii, or bicycle through quaint villages in France. Our "City" tours allow travelers to see the highlights of great cities around the world with unique insights provided by our expert tour guides.

Our People
In our experience, exceptional travel experiences are almost always delivered by exceptional people. With that in mind, we utilize a comprehensive approach to select and employ the leading tour guides and tour providers around the globe. We hold our people to very high standards which we measure by our comprehensive Quality Control process and, most importantly, by our customer feedback, which we will actively seek from each of our customers.

Our Owners
Shore Excursions Group is owned by seasoned travel executives possessing extensive experience across many sectors within the travel industry.

Michael Bonner
Mr. Bonner has over a decade of experience working in the cruise industry in a variety of roles for both Royal Caribbean Cruises Ltd. and Viking River Cruises. Most recently, Mr. Bonner was the Chief Operating Officer for The Scholar Ship, a Royal Caribbean program aimed at providing college students onboard educational programs in conjunction with enriching shore excursions around the world. Mr. Bonner also helped co-manage Viking River Cruises U.S. Operations, and he ran the corporate, strategic, and deployment planning functions at Royal Caribbean. While at Royal Caribbean, Mr. Bonner was responsible for forming Royal Celebrity Tours, Royal Caribbean's land-based tour operation in Alaska, which takes cruise passengers on multiple day tours through the interior of Alaska either before or after their cruises. Prior to working at Royal Caribbean, Mr. Bonner was a consultant for Booz Allen & Hamilton.
Less
from $355.00 (USD)
Per Person
Contact Us
Tour Type
Group
Group Size
Standard
Activity Type(s)
Cultural, Scenic
Tour Duration
12 Hours
Activity Level
Moderate
Tour Leaves From
Cruise Ship Pier
Food/Beverage Provided
Lunch
Special Instructions
Comfortable clothing and sensible walking shoes are recommended. Sun glasses and sun screen are suggested.
Restrictions
Guests must be able to walk on paved and cobblestone surfaces. There are a few steps at sites. Due to its quick pace, this tour is not suitable for any mobility restricted traveler including slow walkers, or guests who need to sit and rest periodically. Public restrooms are available throughout the excursion; however, please note, they usually cost approximately 0.50 EUR to 0.70 EUR (not included) and need to be paid in cash.
Terms & Disclaimers

"RANDELL'S TRAVEL, INC. is registered with the State of Florida as a Seller of Travel. Registration No. ST37674."